Take it to the discussion page

Take it to the approval page

I totally ruined it. >< OA is Nightshine, Redone artist is Ivystripe and tweakers are Ashshadow and me. Tweaked tom match description. Many credit and thanks to Burntclaw for sending in the apprentice file, and that made my life much easier. :) Stealthf🔥re ❤Warriors Forever!❤ 08:53, October 2, 2015 (UTC)

K so I smudged my white patches with a 10 px bristle brush and i did not smudge or blur the texture- i used a paint brush and added dark and light tones to show the light hitting the fur and the shadows to give his fur a "bristling" effect. Nice image, anyway =) User:Burntclaw/Sig 09:09, October 2, 2015 (UTC)

That's texture. There is tabby stripes I promise, it's just harder to see because it's a tiny image.Stealthf🔥re ❤Warriors Forever!❤ 23:01, October 2, 2015 (UTC)

The texture on his face isn't texture; it's little triangles that just throw the colour off...also, could you add a bit of depth to the shading? It's looking a bit flat. ★ Berry ★ Midnight Monster's Parade! 13:15 Sat Oct 3

Reupload I'm being careful with the shading as the texture and stripes disappear when it gets too dark, and I'm near the brink. Everyone's fluffing up their Thistleclaw a lot! Do I need to fluff Thistlekit?Stealthf🔥re ❤Warriors Forever!❤ 20:18, October 3, 2015 (UTC)

His other images appear to have a small bit of black near the eyes- do you mind adding that? The warrior and dark forest images show what I'm insinuating. ~☯ Breeze Five Nights at Freddys 21:27, October 3, 2015 (UTC)

Reupload Don't tell me to smudge it anymore, cause I did before and it somehow disappeared O.o.Stealthf🔥re ❤Warriors Forever!❤ 21:49, October 3, 2015 (UTC)

Reupload I've lowered the opacity of the texture to help see the stripes and smudged them. I completely forgot about the paws so I'll do that in the next upload.Stealthf🔥re ❤Warriors Forever!❤ 21:01, October 6, 2015 (UTC) 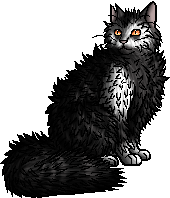 oa's include bramble, mintstarr, shelly, silver, and jayce who was awesome enough to give me this and upload for me ;-; ★ Berry ★ Midnight Monster's Parade! 11:06 Fri Oct 2

This should use the old linear art- it wasn't nominated for a linear tweak. Very pretty btw, maybe try erasing a little bit of the texture on the edge of the paws and the face so that it would look less grey. User:Burntclaw/Sig 11:36, October 2, 2015 (UTC)

I literally don't care either way. Given that it's explicitly stated he was named after his spiky fur, I think the more spikyness, the better. I was going to say that on the other images, but the apprentice was archived before I got the chance. —Jayce  ( 12:25, 10/2/2015 )

I think the shading is fine, personally. Smooth out that white patch on his cheek, it looks a little too sharp compared to the other patches. Jayie Unwritten words~ 18:30, October 3, 2015 (UTC)

I know shading darkness is artist's choice, but right now it looks too dark. can you please lighten it, and smooth it out on teh chest area? And define the facial shading and the paws. Appledash the light of honor 17:02, October 4, 2015 (UTC)

Still a little too dark. Also the facial shading needs to be defined some moer, and can you blur/smooth that little light spot on his chest? And smooth out the farthest paw? (I absolutely suck at explaining. Someone teach me how to.) Appledash the light of honor 17:22, October 4, 2015 (UTC)

I'll add the rheumy eyes and he ragged fur in my next upload. Oops. ☽➸ Hawky Void Shadowshot21:53 Sat Oct 3

Did you add the layer of texture? There's a very light one on the apprentice, I'm not sure if you added it or not. This looks gorgeous. :) The color is fine, I think. I sent Hawky the file, the colors will probably be colorpicked fro that. I use highlights on my images, which makes them look a bit brighter. Shinxy used Thunderbolt! 22:10, October 3, 2015 (UTC)

Yes, Shinx. I used texture. I made sure you could barely see it, because you can barely see it on the apprentice. ☽➸ Hawky Void Shadowshot3:03 Sun Oct 4

In my opinion it is. Literally it looks blurred as it is but if someone else disagrees then I guess. Appledash the light of honor 03:05, October 4, 2015 (UTC)

Reups Hopefully this looks better. Redid the shading while still keeping it along the same shading style as Iveh's. Switched the colors around a little bit User:Winterflurry/Sig 00:20, October 7, 2015 (UTC)

For an examples, here is Oatwhisker (WC) before I redid him ages ago. See the repeating, sort of rippling triangles? That is triangular tabby. That is not realistic. Birdsong is fine. ★ Berry ★ Midnight Monster's Parade! 05:29 Wed Oct 7

She looks green, regardless. Also, people can have their own opinion. The image you provided is not triangular, it's just unrealistic. User:Burntclaw/Sig 05:37, October 7, 2015 (UTC)

What was wrong with the opacity of the previous version's stripes? This was nominated to remove the ginger, and Ivy's shading did not need to be redone. It could have been tweaked very easily. —Jayce  ( 05:47, 10/7/2015 )

She doesnt look green to me. Tbh i think the color previously looked too green, pelt color and stripes Storm♫ 12:21, October 7, 2015 (UTC) 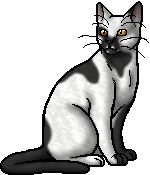 Ugh. He looks super gray and I will fix that. OA is scarlet. If she wants this I will indeed surrender it. Tweaked to define shading and I also changed the color of the earpink so it would look better with the gray + white patches. Appledash the light of honor 21:40, October 6, 2015 (UTC)

There's also a white pixel on the ear. I know it's nitpicky, and not necessary, but you can fix it if you want. Splook sweet  creature 03:31 Wed Oct 7

Re-uploaded This tweaked image is the redone image, which is a completely different image from the original and only has one OA. I'm not entirely sure if I got what you meant, but if I didn't feel free to give an indication. User:Burntclaw/Sig 03:21, October 7, 2015 (UTC)

im not darkening it any more....shes very pale grey qand white. its supposed to be hard to see. not to mention mottles will probably make her look darker anyway when i get to them. david 🌈 05:40, October 7, 2015 (UTC)

No I mean those under the stripes. Forget what I said, my screen was on a very weird brightness just now so things weren't showing up correctly. Cheryl You're so Gorgeous ❤ ~09:45,10/7/2015

The green shading is kinda throwing off the color, could you fix that? Appledash the light of honor 11:30, October 7, 2015 (UTC)

Retrieved from "https://warriors.fandom.com/wiki/Warriors_Wiki_talk:Charart/Tweak_Page?oldid=1007231"
Community content is available under CC-BY-SA unless otherwise noted.